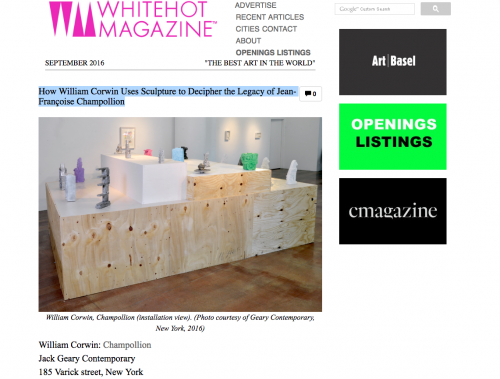 Entering the exhibition Champollion by New York-based artist William Corwin, two questions arose: What is the relationship between hieroglyphs and cast sculptures? and Does sculpture talk? Without doubt, the title of the exhibition insinuated the idea of a direct connection between the first and the second. Indeed, it was named after Jean-Françoise Champollion, the father of the decipherment of hieroglyphs, and was installed after the shape of an Egyptian burial ship.

At the front of a large pedestal, four lion-like statuettes, displayed at an equal distance, watched over the entire exhibition area and set the tone of the show. Although their size was not that big, they had a strong presence and their unusual yet familiar forms conveyed the idea of memories and objects of desire.

With a closer look at the small and medium-sized cast sculptures, in lead, plaster and resin, one recognized different objects of daily use or from forgotten worlds, combined wisely by Corwin, following his very own alphabet. Indeed, like hieroglyphs, which are composed by both phonetic and ideographic elements (one of the main discoveries of Champollion), Corwin’s sculptures are made of found and constructed symbols, both referring to image and text, and they look as if they have been elevated from the flat papyrus surface to the three-dimensional world, inflated with the breath of contemporary thought. The celestial ship carries a large number of sculptures, different in their shape and color, yet united by a common mysterious aura that is so typical for ancient burial objects. Some of them clearly referenced ancient Egyptian or Greek Icons, others had a more futuristic look, highlighting the creative mind and futuristic vision of the artist and drawing on the pre-modern history of assemblage in order to coagulate into a distinct body.

The sculptures, although totally independent from each other, kind of belonged together, like a Gesamtkunstwerk, covering centuries, if not millennia, of human history and forms of non-verbal communication. Their totem-like character made the visitor think about committal sculptures, funerary practices, and, in a more quantum-physicist way, the question of parallel universes. But Champollion is not an exhibition about death. It is rather about a shift in the approach of object making, opposed to the digitization processes of today, wherein information and knowledge are conflated into the abstract “memory” of a device instead of a material and tangible object.

Corwin’s earlier works are made of white plaster and appeared more classic, due to the use of casts and imitations of ancient-like objects, while the more recent sculptures show experimentation with color, other materials and items of our daily life. Ropes, little bricks, and even fruits combine into colorful constructs and creatures similar to altarpieces. The walls of the gallery displayed a selection of small vitrine boxes which were much more minimal, showing flat and smooth pieces of white plaster, combined into a broken surface, insinuating the image of a forbidden book. A few colorful woodcut prints, showing actual text, completed the exhibition and were the only visible reference to a link between spatial forms and words.

Champollion’s great discovery was that hieroglyphs were not only used for sacred and ritual functions, tied to esoteric and philosophical ideas. He showed to the entire world that they were a rich record of historical information, and made the Egyptian culture accessible to everyone (thanks to his translation into our common language). William Corwin’s works reconnected, after some 3000 years, to those forgotten ritualistic approaches to life, adding to the practice of sculpture-making a rich vocabulary of pictographic and phonetic forms.