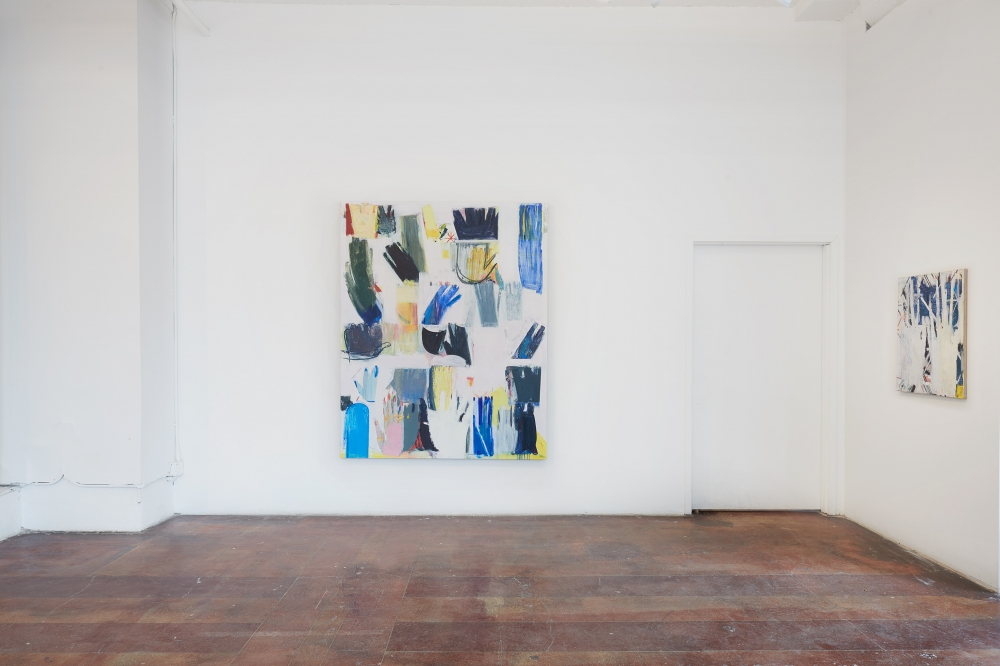 On a portentous day in 1958, Willem de Kooning was at work on a painting in his Manhattan studio. Over the previous few years he had moved away from his tortured, frenzied Women in favor of less–densely worked pictures, their power and energy concentrated into fewer strokes of broad, calligraphic paint. This one in particular, a horizontal canvas of about fifty by sixty inches, contained three prominent slashes—of red, yellow, and sky blue on an off-white ground—as well as a couple of vertical black strokes. At some point, de Kooning must have turned his back on the canvas or stepped out of the room. Unbeknown to him, the story goes, his two-year-old daughter then clambered into the studio, mucked her hands in some white paint, and began pawing the canvas, leaving nine or ten tiny handprints on the work.

De Kooning’s response—his artistic response—was not to throw out the painting or cover up the unexpected handprints. Instead, he left them as is, embracing the “accident” of the event—a move informed perhaps by his love for his daughter, but one that was also typical of the master Ab-Exer’s proclivity for chance and serendipitous discovery. The work, handprints and all, is now in the collection of the Virginia Museum of Fine Arts under the fitting title of Lisbeth’s Painting.

I kept thinking of this work and its story when I saw “once, and twice,” a solo exhibition of eight new paintings by Sangram Majumdar, on view through April 12 at Geary in Lower Manhattan.1A standout work, expulsion (2019), contains a field of mint green, upon which sits a variety of abstract marks and shapes. Staccato dashes and blips whirl around the outer edges of the canvas, stretching inward but never quite moving all the way into the center of the work. Also reaching in, from the upper-left-hand edge, is a tan form in the shape of a hand—about the size of a small child’s. Below this, one then notices what appear to be the ghosted outlines of two other hands. The resonance between Lisbeth’s Painting and expulsionfeels so strong that I’d have a hard time believing Majumdar didn’t have the earlier work in mind when he was painting. Those unexpected hands introduce an aspect of human pathos to both works, upsetting our perception of them only as formal exercise.

Majumdar is an Indian-born artist based in Brooklyn and Baltimore. A professor of painting at the Maryland Institute College of Art, he has exhibited widely, including at Steven Harvey Fine Art Projects on the Lower East Side just a few months ago. The current exhibition consists of new works, all painted in 2019. Hands abound. The gallery’s press release mentions a “recent engagement with the archetype of hands as tools for creating, touching, claiming, and exclaiming,” and though it may be difficult for viewers to perceive exactly how this has been accomplished, it is obvious that Majumdar seeks to thoroughly investigate “the hand” as a multifaceted symbolic form.

The first thing one notices when entering into the Varick Street exhibition space is how differently each painting sits on the wall. Majumdar seems intent on resisting stylistic uniformity—the eight works vary greatly in size, color, and paint handling. The larger of the works, for instance, are nearly eighty inches tall, while the smallest is no bigger than your typical desktop monitor. Majumdar is an exceptionally talented colorist, and the current exhibition demonstrates the artist’s impressive range across and around the color wheel. In a show of such few works, the effect could easily feel disjointed or incoherent, but Majumdar manages to string both formal and conceptual threads together among these disparate pictures.

One key painting, a cautionary tale (after Rama destroys the ogress Tadaka), was sourced in part from an early–eighteenth-century Indian illustration of the Ramayana, a Sanskrit epic poem. In the story, the poem’s hero, Prince Rama, is sent to kill Tadaka—an evil and cursed forest princess wreaking havoc on the community—but balks at the task and instead only cuts off her hands. Tadaka then becomes invisible and attacks Rama, but Rama shoots her through the heart with an arrow and so ends up killing her after all. In a cautionary tale, Majumdar presents the ogress in profile, as some sort of woman–wolf hybrid. Her body is partly wiped out; it disintegrates and tangles up into the background, a compressed and shallow field of red and burnt yellow. This sense of constriction and discomfort recapitulates often in the other paintings.

That “dismembered hands” are relevant to the current exhibition is clear, but the theme of invisibility also seems to have been important for Majumdar as an entryway into thinking about the painter’s role as a presenter and manipulator of information. The artist, I gather, would assent to Voltaire’s declaration that “the secret to being a bore is to tell everything.” Indeed, much of the drama in these pictures derives from the way that we are given only a peek, or a glance, at his erased, scraped-out, and occluded figures. Call and response, one of the two largest works in the exhibition, is composed entirely of hands organized on the canvas in an almost grid-like fashion. This arrangement gives the painting a frontal, even defensive posture—many of the hands here could be blinking crosswalk stoplights. But Majumdar’s use of repetition is anything but mechanical or rote. What may feel at first like a wall instead reveals itself to be a porous, open field, in which forms by turns move forward to our attention and recede into oblivion. On which of these ghostly, shifting forms shall we, like the hero Prince Rama, aim our arrow sights? It’s never quite clear.