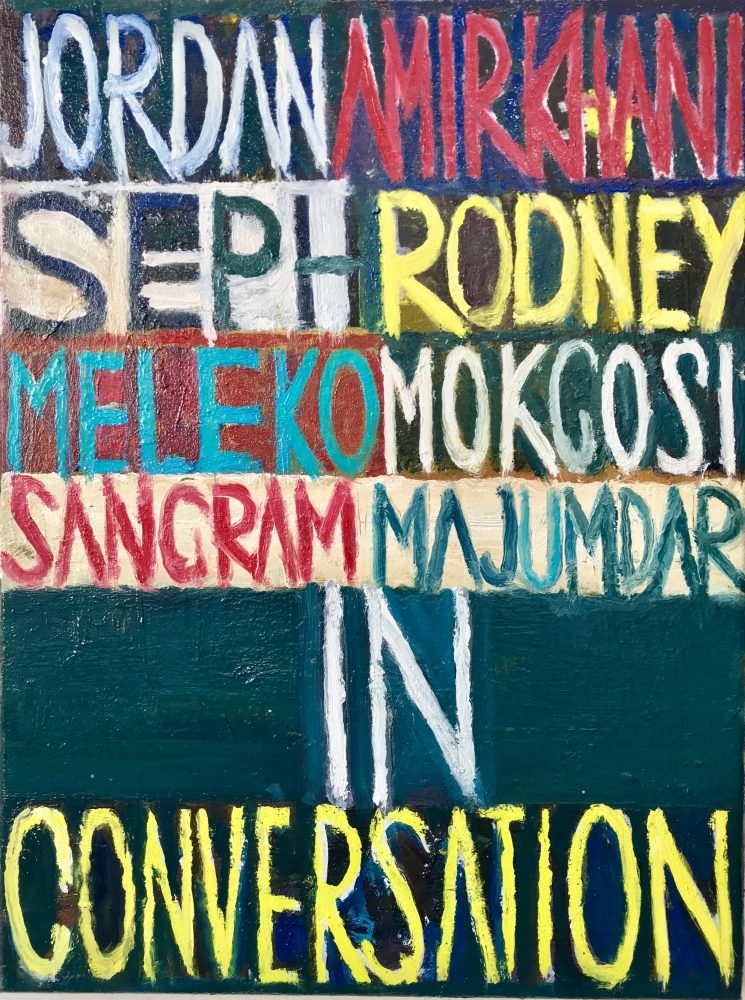 Please join us at the gallery on Saturday, April 6 from 2-4pm for a panel discussion on the topic of Sangram Majumdar's current solo exhibition at Geary, once, and twice. Majumdar will be joined by Dr. Jordan Amirkhani, Meleko Mokgosi, and Seph Rodney, PhD.

Dr. Jordan Amirkhani is an art historian, critic, curator, and educator based in Washington, DC, where she serves as a Professorial Lecturer in Global Modern and Contemporary Art History at American University. Jordan received her PhD in the History and Philosophy of Art from the University of Kent in the United Kingdom in 2015 and has held academic posts at the University of Tennessee in Chattanooga and Canterbury Christchurch University in the UK as well as curatorial positions at The Royal Academy in London, England and The Phillips Collection in Washington, DC. Prior to her engagement as Juror for the CACNO’s 2019 Open Call exhibition, Jordan organized exhibitions for The Moon Gallery at Berry College in Mt. Berry, Georgia and The Apothecary Gallery in Chattanooga, TN. Amirkhani has published scholarship on the Franco-Cuban Dada painter Francis Picabia, the British conceptual art collective Art & Language, and the Serbian feminist political action organization Grupa Spomenik, and writes criticism for a number of contemporary art publications including Artforum, Art Practical, Baltimore Arts, and Burnaway.org. Her work on contemporary art and artists working in the American Southeast garnered her a prestigious Creative Capital/Andy Warhol Foundation “Short-Form” Writing Grant in 2017 and two nominations for The Rabkin Prize in Arts Journalism in 2017 and 2018.

Meleko Mokgosi is an artist who works within an interdisciplinary framework to create large-scale project-based installations. By working across history painting, cinematic tropes, psychoanalysis, and post-colonial theory, his practice interrogates narrative tropes and the fundamental models for the inscription and transmission of history alongside established European notions of representation in order to address questions of nationhood, anti-colonial sentiments, and the perception of historicized events. His artwork has been exhibited nationally and internationally at venues including the Botswana National Gallery, The Hudson Valley Center for Contemporary Art Museum, The Studio Museum in Harlem, the Armand Hammer Museum of Art and Culture Center, Yerba Buena Center for the Arts, and the Lyon Museum of Contemporary Art. Mokgosi is also Faculty Fellow-in-Residence at Second Street.

Seph Rodney, PhD was born in Jamaica, and came of age in the Bronx, New York. He has an English degree from Long Island University, Brooklyn; a studio art MFA from the University of California, Irvine; and a PhD from Birkbeck College, University of London in museum studies. Also, while in London, he created, produced, and hosted a radio show called The Thread, broadcast on Resonance FM from 2008-2011. He is currently a staff writer and editor for Hyperallergic, writing on contemporary art and related issues. He has also written for CNN Op-ed pages, American Craft Magazine and NBC Universal, and penned catalog essays for Joyce J. Scott, Teresita Fernandez, and other artists. He can be heard on the podcast “The American Age”. His book, The Personalization of the Museum Visit, will be published by Routledge press in June. In 2006, he was featured speaker in the Favorite Poem Project.