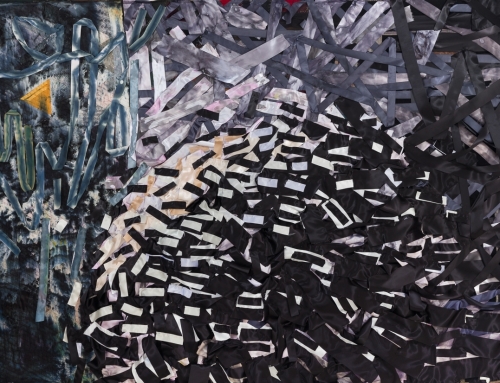 The yellowing ribbon from a once-loved dress, a bit of lace from Grandma’s curtains, the dregs of breast milk leftover as the baby sleeps, and tears shed by an ovulating woman all recall moments, memories, and narratives. They’re also all materials you might find in Vadis Turner’s affecting exhibition Tempest at the Frist Center for the Visual Arts.

Three different series comprise Tempest, each marking a specific rite of passage in a woman’s life. Turner’s first solo museum exhibition checks all the boxes: It’s eye-poppingly gorgeous with compositions that appear so effortless that they hide the artist’s tremendous skill; it’s built on a smart conceptual framework that feels organic and evolved; and it’s responsive to the contemporary world in a way that welcomes dialogue.

The first room of the gallery is named for the Wild Woman. Here, Turner’s large-scale textile paintings evoke a life lived passionately. Turner creates these with recycled materials like ribbon, quilts, yarn, and balled-up fabric that she dyes and paints. She scrunches, loops, and drapes these materials, transitioning them to brush strokes that lead the eye as if by a wild wind. There is something dark and dangerous about these paintings, like they are just barely containing gusts of energy that twist and whirl within.

The second room is devoted to The Mother, and the materials change. Turner uses charred branches, ashes, and resin to consider the rite of motherhood through metaphor. In several wall pieces, she has suspended ribbon in resin to show the swelling potential of the womb, its arc of triumph, and the emptiness that follows. In the center of the floor, a large puddle of Turner’s breast milk is mixed with paint and resin. It holds the charred remains of sticks, set in pairs, like an offering.

The third room is for The Elder, and though it seems the most organic evolution of the exhibition, it still surprises. The series, Heirlooms, grew out of Turner’s work with Metro Arts Commission’s Learning Lab, a professional development program designed to train Nashville artists in civic, social, and public art-making. Turner interviewed senior-aged women, asking what they learned from their mothers and their grandmothers. She calls it “collecting wisdoms.” One raised champion roses. Another at 101 years old is in five book clubs this year. She spoke to a woman who escaped the Holocaust via Shanghai. Turner curated these stories into her work, creating sculptural and wall pieces that show her at the height of her powers. The Heirlooms are disarming, intimate, and strange, but the strength of their composition carries the weight like magic.

NAM: I feel such a strong sense of sisterhood when I experience your work. Tell me what inspired each series.

VT: My relationships with women have leapt off from making this work. In the Wild Woman series, the subject matter came from me riffing off famous literary heroines, creating new lives for them and looking at their impact on their own environment.

The Mother series was the first time I made myself the subject of the work. It was hard. But as an artist, you want everything to be hard. You want to get your ass kicked a little bit each time and be uncomfortable and not know how to talk about it, and you’ve got to figure it out. I had to figure out how to visually talk about my own fertility, all the while thinking, Is it enough to make work about motherhood? It’s been done so many times. How do I want to present it?

Before making the work for The Elder, I interviewed women whom I did not know to collect wisdoms. I was touched by the generosity of the human spirit when people were willing to just to sit down and tell me what it is they’ve learned from their mothers and grandmothers. I would say that in the majority of conversations, somebody was crying in the first couple of minutes. It meant something. You could sit down with a stranger and turn on a recording device and get to what matters . . . I felt such a sense of gratitude and responsibility for all of these stories that I didn’t know how to turn it into my own work, which, by the way, is abstract.

NAM: I love how you took on that challenge. I’m interested in the communal aspect of art-making and in what happens when artists purposefully intersect with people and their narratives out in the world and then bring it back to the studio. What have you learned in this process?

VT: I’ve been making art for a while now, and I need to have confidence in my own idea, in what’s worth bringing into the world. I learned that it’s so hard to keep it simple and edit out everything and boil it down to what really matters––to find the essence of the thing. I’m learning to have the confidence to say “This is it” and not jumble it up with a lot of bells and whistles. It’s more vulnerable for me, but it is also more honest; compositionally it’s harder. And I learned from these women that you’ve gotta enjoy your life. Your work needs to matter.

NAM: The Mother series acts as a palette cleanser between these two visually dense series. Visually it’s more muted, and conceptually it’s a bit daunting. Can you talk more about this work and how it came to be?

VT: The body of work is called Bells and Burn Piles. Bell is a word that I use interchangeably for a vessel, a head, my sons, and a womb. A bell has the potential to make sound even in silence. A womb, even when it’s inactive or dormant, is forever associated with creating energy, life, or activity. I started making the work when I became pregnant with my second son and last child, knowing that this was the last time I’d ever do this, the last time my body would ever fulfill its potential as a system. If you think about system as heirloom, this was it for me.

I partnered that moment, that rite of passage, with the burn piles that are scattered about our property. My mom tends to the trees and gathers limbs that fall after a storm and wash up from the lake. She creates these massive hive-like, womb-like mounds of collected sticks. They’re like witch hair meets a hive meets a dwelling. They’re amazing. I go for walks a lot when I need a break from the studio, and they’re part of the landscape. The burn piles are wild and wicked when they’re piled up, and then they get burned in a bonfire. They become charred nuggets. I wanted to consider fire less as a destructive force and more as a regenerative force. The bell and the burn pile need each other. After the birth or the fire happens, the bell is empty and the womb becomes this ghost. Life is out of it. That’s when the story leaves the wall and transfers to the floor and becomes those breast-milk pieces [in Pairs.]

“I’m learning to have the confidence to say ‘This is it’ and not jumble it up with a lot of bells and whistles.”

What interests me is not the notion of death or destruction but of new beginnings . . . to nourish and heal these charred remains lets them take on a whole new activity and life . . . to become artifacts and specimens. In this show, they partner together and start to create relationships. That’s my two boys.

Tempest is on view in the Gordon Contemporary Artists Project Gallery at the Frist Center for the Visual Arts through September 10. Learn more at www.vadisturner.com and www.fristcenter.org.