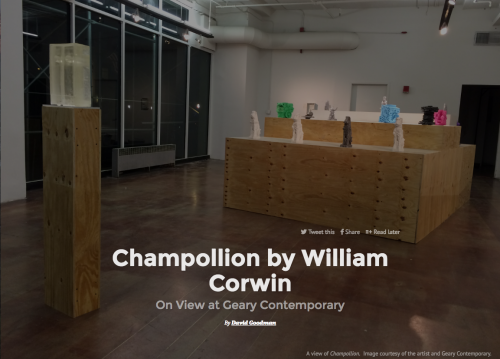 Champollion consists of a series of cast sculptures in plaster, lead, and resin. Some of the sculptures are dyed to provide a consistent color throughout the volume of the piece. The installation consists of a ziggurat and a pedestal representing the Egyptian solar bark of the sky on which the gods reside.  Curator David Goodman offers his insight into Corwin’s methodology, one that juxtaposes digital culture characterized by hacking and the hieroglyphics of Egyptian civilization.

(If a bird was perched on the bow of this Bark, what song would it sing?)

We gather knowledge by collecting symbols. They can be arranged and ordered pictorially and phonetically. Clues yield to context which builds history and become universal understandings. Mark-Making becomes an object, personal heirlooms travel generations and are carried on the backs of a full spectrum of disciples—from Elders to Easy-Riders.

In a short span of time, technology has digitized the interpretation of our contemporary culture and spawned a massive array of communications. These are easy absorbed through personal devices. Our conversations have become enmeshed with abbreviated synthetic patterns that move from hashtag to common place.

William Corwin’s works are forms of hybridization. His style equipped with an enormous alphabet of abbreviation, footnotes of the primitive and with the immediate depth of a wiki. The edges are jagged like binary blocks and also realized sensuality. These are works of Synthetic Digitism. Eyes are sunken-in, arms wrap to embrace, flat tiles are stacked and arranged to make small interior spaces and they all refer to active information gathering. The sculptures appear to be found fragments. The shattered architecture reveals mystical significance and they transform into contemporary Icons.

Champollion, is a presentation in a Bark—a ship that would guide a pharaoh on their interstellar afterworld journey. Set up for this exhibition, Corwin’s solar vessel is on a burial voyage for the Father of Egyptology. Jean-François Champollion (an original Hacker) who freed the hidden narrative held captive by poor translation. He deciphered hieroglyphics and opened history.

Like any process of 0’s and 1’s, there is always buffering—some works share a repeated element—the shape of a Bivalve Shell—which looks embossed or chiseled onto a surface. It is a gesture of fertility delicately adorning a Madonna’s face or womb, and also more ubiquitously—like a design on a temple wall.  Color is only provoked by way of obsessive documentation.

With a multitude of deep-rooted connections there are only future possibilities. What begins as phrases on cocktail napkins, if provoked, can turn into words that lead a Nation. Similar confidences have been whispered  into the cracks in the sides of these totems—split and restacked forms. Initially deciphered and accepted like contemporary HTML, now revealed as legendary.