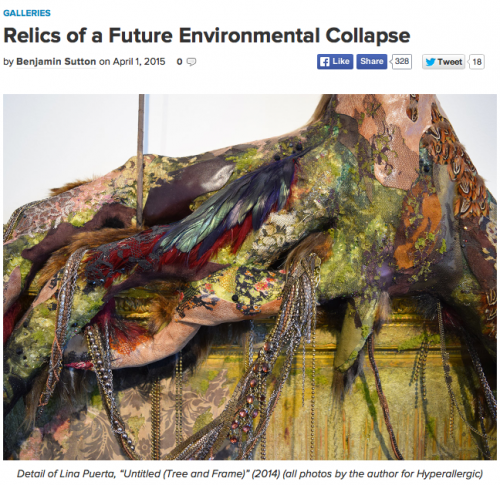 Relics of a Future Environmental Collapse

Lina Puerta makes ruin porn on an unusually intimate scale. These are not dramatic photographs of urban blight or elaborate installations made to resemble the aftermath of a meth lab explosion, but intricate objects in which natural forms seem to overtake man-made ones and artificial materials mimic the growth patterns of vines, trees, and seeds. Puerta’s latest work, currently on view in Traces at Jack Geary Contemporary, marks a departure from her previous series, in which plants, lace fabrics, and chain jewelry cropped up in galleries like invasive species. Here, discrete objects like a picture frame, coffee table, watches, and mirrors are overcome with moss, mold, and ropes of jewelry. In other works, fragments of domestic spaces like chunks of walls, mirrors, and, in the show’s largest piece, a vast sheet of acrylic tiles, crumble and bloom with colorful fungus. The effect suggests artifacts rescued from some jungle bunker or hurricane-slammed tax haven, with rich and luxurious materials dissolving into dirt or sprouting plant life. The most accurate term to describe Puerta’s aesthetic is something like “post-human baroque.”

The work in Traces has a science-fiction seductiveness to it — like domestic companion pieces to Daniel Arsham’s more techie sculptures. Her works manage to seem at once nostalgic and futuristic. This is especially pronounced in “Untitled (Tree and Frame)” (2014), in which a painting in a gilded frame has been consumed with mold and broken in half. Its upper edge seems to have sprouted a new plant — an effect that recalls works by Valerie Hegarty — while an elaborate system of pink, purple, and paisley roots spills out beads, chains, and exotic-looking feathers. In “Untitled (triptych)” (2014), a small object that looks like it belongs on a heroine’s vanity in a 1950s Hollywood melodrama is caked with dirt, mossy print patterns, and fragments of lace, as well as speckled with crystals. Such pieces suggest objects aliens might excavate from the ruins of the Victoria and Albert Museum in 800 years, beautiful relics of a civilization whose penchant for pretty things eventually destroyed it. In this way, Puerta has pushed the implicit environmental politics of her work to the surface in Traces.

Her art has always had a kind of toxic allure, but the execution and level of detail in the latest pieces makes for a more convincing hybrid of natural and man-made materials. Nowhere is this more apparent than in the half-dozen works on paper included in a project room at the rear of the gallery. In the series, which is titled Galaxies after the celestial systems the abstract compositions slightly resemble, Puerta combines her trademark coils and patches of fabric with subtle paint washes and elegantly arrayed insect wings retrieved from dead butterflies, moths, and dragonflies in her family’s garden in Colombia. As opposed to the simulated decay of her sculptures, the Galaxies convey a palpable sense of environmental peril and fragility.