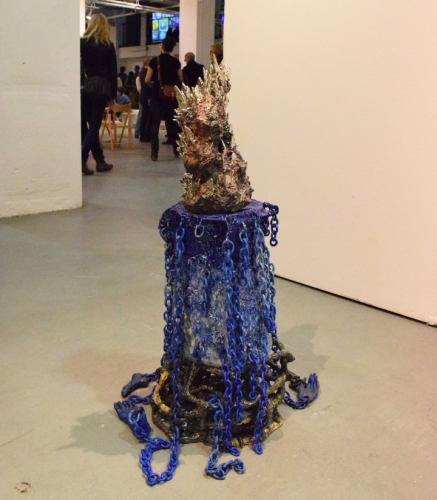 Some art fairs have themes. Some art fairs cater to fans of a particular medium. Others are constrained by geography or material. Some unintentionally crystalize current trends, like plants or the ceramics renaissance. And some art fairs are just art fairs, their booths full of pretty paintings, elegant sculptures, and a sprinkling of other types of works. The 2018 New York fair of the New Art Dealers Alliance, or NADA, falls into the latter category, and there’s nothing wrong with that.

NADA New York’s 100 exhibitors are spread throughout Skylight Clarkson Sq, a space so long and cavernous that, by the the time you reach the end, your mind may only be capable of Herzogian reverie. However, there are plenty of memorable works to find along the way, and a rapturous moving image program (TRANSFER Download) where you can rest your feet, recalibrate your eyes, and recharge your brain at any time.

As is often the case at NADA, painting predominates, and there are lots of lovely works on canvas this year. The most eye-catching painting display is in the shared booth of Horton Gallery and Western Exhibitions, with its ornate orange wallpaper pattern, which serves as a popping backdrop for Orkideh Torabi’s playful and attractive portraits.

Nearby, another of the fair’s standout portraits hangs in a line of three impressive large-scale paintings by Cheyenne Julien, being shown by Los Angeles gallery Smart Objects. And at just about the other end of the fair, Parisian gallery Pact has a portrait-heavy booth of luscious, glowing paintings by Danny Ferrell, including a number that depict men with their dogs, or just dogs obediently sitting by themselves.

Indeed, paintings of animals are one of NADA New York’s micro-trends this year. Alongside a series of her small works on paper, Nikki Maloof has a large, delightful painting, “Still Life with Urchin” (2018), on the exterior wall of Shane Campbell Gallery’s booth. Further into the fair, in the booth of Stockholm’s Loyal Gallery, Alake Shilling’s “Sweet Curly Kitty” (2018) is a riot of swirling stripes, distorted limbs, and hallucinatory exaggerations.

On the sculptural front, nothing at NADA New York is quite as exaggerated as the two enormous tongues projecting from the walls of Berthold Pott’s booth. The two fiberglass sculptures, by French artist Loup Sarion, frame a perfectly nice but comparatively tame painting by Max Frintrop. However, the fair’s most photogenic work — it practically screams “selfie opportunity!”  — is undoubtedly Cajsa Von Zeipel’s sculpture “Butch Bench” (2017), which consists of two seated figures joined at the hip and sporting colorful, billowing clothes, their laps serving as functional seats. The large piece anchors a particularly strong booth by Lower East Side gallery Company.

A few of the fair’s best booths are devoted to individual sculptors, like that of Buenos Aires-based Walden Gallery, where Rodolfo Marqués is showing painted wood models of handheld devices featuring absurd, politically-pointed game titles like “Breaking into the Suspended Worker’s Sweatshop,” “Hunger,” and “Food for 15 Days.” Meanwhile, visiting the booth of Queens-based gallery Mrs. is like stepping into an IRL still life, with its tabletop display of refined and funny ceramic sculptures by Genesis Belanger. For a very different but no less stellar display of clay, visit Geary Contemporary’s booth, where the powerful and prickly totems and tangles of glazed ceramics by Heidi Lau are a delight to behold.

Amid all the beautiful objects, a few booths are given over to more elaborate installations or altruistic causes. The standout in this department is Guatemala City gallery Proyectos Ultravioleta, which hosts an informative display and fundraising exhibition for Brigada Puerta de Tierra, a Puerto Rican artist collective based in the working-class neighborhood of Puerta de Tierra, San Juan. The collective hopes to slow the advance of luxury real estate in the area by buying a vacant lot and building a community health center focused on medicinal plants and herbs. Another highlight is Sheida Soleimani’s riotous takeover of the Edel Assanti booth with her project Medium of Exchange, which lampoons politicians who kowtow to the oil industry.

All of which is to say that this year’s edition of NADA New York doesn’t have a conspicuously disproportionate concentration of any one thing, but it has its share of worthwhile pieces and booths. And, again, there’s nothing wrong with that — to expect anything more from an art fair is a recipe for disappointment.