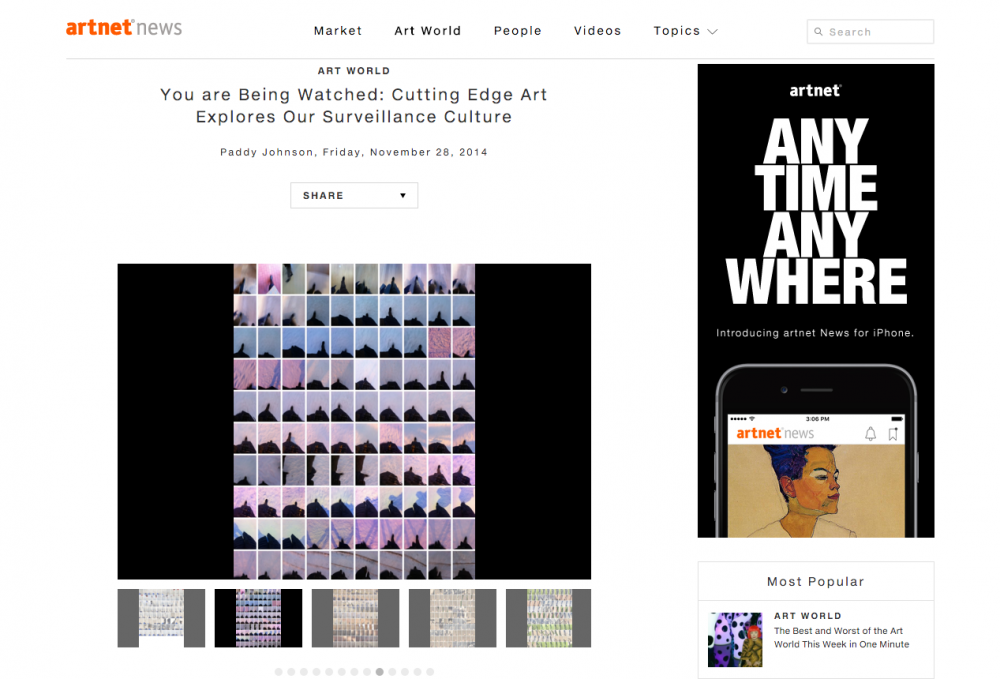 I first heard the term “sky aware" about twenty years ago. An academic speaking on Canadian Public Radio (whose name I no longer remember) used it to describe people who often look at the sky. Farmers who depend on weather are “sky aware"; city dwellers rarely even notice the skyscrapers above them. Being busy, city people need more prompting to turn their heads even slightly off course.

Sky awareness strikes me as a good metaphor for art, and its ability to broaden the narrow vision that has come to define politics and culture. Like a slight turn of the head, even the most mundane art images can illustrate how easy it is to change our perspective. Art teaches us to view ourselves and others differently.

New perspective can be gained even literally through the cell phone images of an artist's feet, like those of Suzette Bross. The Chicago-based artist has produced 20 gridded prints, now on view at Jack Geary Gallery, through December 11, showing her feet while walking. Let's not dress this up—shots of everything below the artist's torso aren't wildly exciting photographs—but once you start looking at the grids you become a little more “floor aware" than you might be normally. Parking lines, which appear underfoot in one body of work, seem to mimic the lines of a soccer field in another piece. It's probably just a formal similarity, but you begin to realize how much of the world we walk on is actually drawn or defined by drawing.

In another section of the gallery, I recognized the bright orange floors as those at the Contemporary Art Institute in Chicago. Once that happened, I realized there were many more museums floors in the series—and of course the checklist tells you as much—the titles are simply the names of the walk locations. Some of these shots were just wooden floors, but I thought they were recognizable regardless. The idea of walking through an art museum only to look at the floor encourages us to think more broadly about what art is and where we can find it.

Surprisingly, the artist's foot tour leads to many unexpected discoveries, but I remain slightly skeptical of the concept. After all, it's hard to imagine work like this being made with anything other than a handheld device—which, when held normally, would tend to be pointed toward the ground. In some ways, this isn't so much a new perspective as it is the default.

Over at Bitforms new space on the Lower East Side, viewers are asked to consider materials that suggest both the sky and the ground. Austrian-based artist Addie Wagenknecht's sparsely-hung show [on view through December 7] includes a line of blinking PCP boards exploding with ethernet wires—a reference to the cloud, gold-leafed security cameras and a series of abstract paintings made by drones. Each work comes with an explanation.

Generally, I don't care for an answer-key approach to art, but since this exhibition is largely about what we don't see, some of it is necessary. As soon as you enter the gallery, for example, you pass under a “Cloud Farming", a network of ceiling mounted circuit boards which intercept and log anonymous live data captured from surrounding WiFi signals.

You wouldn't know that without the description. Everything and Nothing Was Beautiful, a long Helen Frankenthaler-like vertical trail of black gunpowder punctuated by fuchsia pigment, also requires some description, as it is made by tiny drones. “If unmanned drones and systems are being used to kill and destruct places and people in war remotely, why aren't drones being used to create and build creatively?" asks Wagenknecht in a gallery text.

A worthy question, though Wagenknecht's answer seems limited by the drone, which makes for a lousy paintbrush. A video of the drones stuck in oil paint documents the creation of  her earlier work, which, I've been told, was less skilled than her newer work. We see the making of that too—here the drones fly over paper as if crop dusting—but while her control over the medium has obviously gotten better, its quality is only nominally improved.  This gives the work a gimmicky feel. Would we care about this at all if the word “drone" hadn't been used?

I worried that XXXX.XXX would suffer from the same problems; it's a series of five PCB boards with ethernet cables exploding from their ports which, like “Cloud Farming", intercept and store data from WiFi. Ultimately, though, this work escaped its own narrative because Wagenknecht does such a good job of aestheticizing the chaos of networks, politics and technology. A coiled web of cords unfurl to the floor; the circuits' blackness suggest sinister activity, though we're not sure what.

Traces of sinister powers can be found, however, in the two gold leafed security cameras in the main gallery.  They point towards each other, though, static and unmoving. Wagenknicht's exhibition guide tells us that the gold symbolizes “structures of control"—who gets to "surveil" who—and the specialized knowledge required to access specific groups, in this case, the art world. Perhaps the more poignant statement is that these cameras are fixed on each other, with no ability to ability to record what happens outside their field of vision.

It's a strong statement, but ultimately limited. After all, if art is to broaden the way we look at the world, it needs to offer more than a reflection of what already exists.