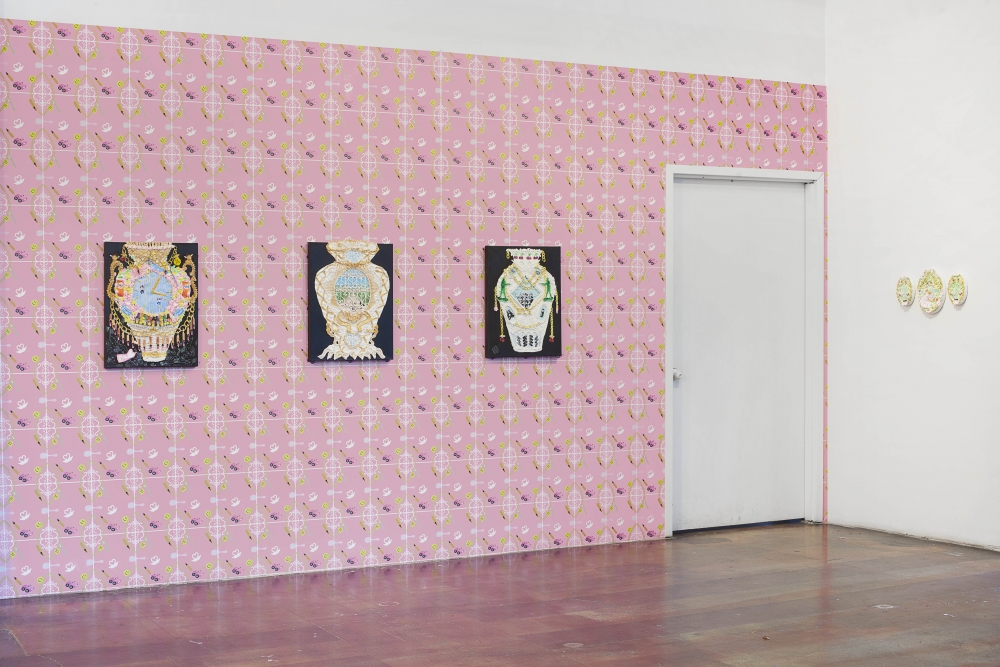 The first-generation Mexican-American artist is rising fast based on her colorful style and themes that address the Latinx experience.

It’s easy to mistake cake frosting for the medium of Chicago-based artist Yvette Mayorga’s paintings. Actually, it’s just acrylic paint piped from plastic bags—but the resemblance is deliberate, and a small reminder that you shouldn’t make too many assumptions about this artist’s work in advance.

Currently Mayorga has her first solo show in New York City, “A Part of US” at Geary Contemporary in SoHo, an especially rare event for an emerging Latinx artist. Mayorga’s work is chaotic yet magnetic, like a collage-covered teenage bedroom luring you into an unapologetically feminine candy dreamland. And yet as you’re lured into this world of celebratory pastries and consumerist American iconography, you also witness the overwhelming anxiety that accompanies artificial excess and meet Mayorga’s sharp critique of American xenophobia.

A first-generation Mexican-American, Mayorga paints using the same technique her mother used to decorate cakes at the Marshall Field’s department store in 1970s Chicago. But even as Mayorga mirrors her mother’s labor and technique—which was powered by the hope of living the “American dream”—she questions the social realities for immigrants invested in that fantasy. Her perspective on the intrinsic role of immigrant labor in feeding US consumerism and shaping American identity comes from a network of family members, some of them migrants from Jalisco and Zacatecas, who worked for iconic American corporations like John Deere, Tootsie Roll, and Tyson Meats in Moline, Illinois, the small town 2.5 hours outside of Chicago where the artist grew up.

For this new show, some 20 paintings and five ceramics are evenly spaced and organized at Geary Contemporary in a digestible way, but you get the feeling that the exuberance of her vision might be better achieved in the form of immersive installation. In fact, her previous installations have been housed as entire experiential rooms, from the Refinery29-sponsored “29 Rooms” exhibition in Chicago to Expo Chicago 2017, where she presented pink and gold wallpaper with details of migrants wearing backpacks and ICE jeeps with bodies hanging out of the trunk; an oversize nameplate necklace inscribed “Illegal”; and a nine-foot banner with cherub angels holding a pair of Nike Cortez dubbed Killer Shoes (Hernan Cortés).

It was that work at the Chicago Artist’s Coalition booth at EXPO Chicago 2017 that got Mayorga noticed by Geary Contemporary. Claire Voon from Hyperallergic called it one of the best booths at the fair, saying, “You don’t typically see political work this personal and raw at art fairs, much less by young artists of color. Can we get more of this, please?”

Geary gave her a spot in a group show the following year. There, she showed her “Monument” series of six-foot cake effigies plastered with toy soldiers, angel figurines, and satin heart cake toppers. These were completely made from acrylic paint, plaster, textile, and dollar store trinkets, unlike her earlier monuments from 2014 which used actual sugar frosting (these are now rotting underneath their acrylic glaze).

As for her New York solo debut, one of the two largest paintings, Through the Gate (2019), shows a wrought iron fence foregrounding a landscape of sugary detritus: cherries, gummy worms, donuts, and McDonald’s french fries, amid other obscured objects. Beyond the sculptural barrier or border lay what looks like a wonderland of cheap thrills or maybe the fruits of labor. There are hints of flip flops, fingernails, a pair of Nike Cortez tennis shoes, and yellow emojis.

Only after you situate yourself in this cluttered scene and lift your gaze do you see the green camouflage of an Army soldier’s fatigues and boots surveilling your existence.

The painting is a metaphor for US migration fantasies. Mayorga’s faux-naïf style of rendering helps further the sense that the world it is conveying is based on an illusion. This type of critique is nothing new for Mayorga. Although some viewers may guess that the anti-immigrant rhetoric of the Trump presidency inspired Mayorga’s work, she is quick to dispel that idea: “I’ve been using frosting to talk about my family and my identity and the border since 2013,” she tells me. “Now that there’s a heightened microscopic view of it, people have things to say, but this has been happening for decades. It’s not new.”

Throughout, Mayorga incorporates pop symbols like Nikes, Hello Kitty, and Tweety Bird, recognizable to many working-class Latinx who shop at dollar stores, clean with Fabuloso, and love their afterschool snacks of hot Cheetos and Fanta sodas. Plastic sunglasses and trinkets, hoop earrings, acrylic nails, and corn snacks have lowbrow connotations but also signify abundance and access to cheap, manufactured goods. The discrepancy at play in showing these paintings at a white box gallery space in Soho delivers a thrilling political punch.

The work has a clear art historical lineage in ‘rasquache’ aesthetics, a term created to describe much of the Chicano art canon, defining a sensibility of using recycled materials and cultural objects often described as “kitsch.” Contemporary art spins on “rasquachismo” can also be seen in the altar installations of Amalia Mesa Bains and the candy-painted power tool sculptures of Ruben Ortiz Torres. Such Chicano art has helped make the case for the value in the mundane and provided a framework to draw on for Mayorga.

Her influences clearly go beyond insider references. Attempting to engage with significant and collectible art objects of American history, she riffs off Karl Müller’s Centennial Vases of 1876, made to commemorate 100 years of US history. For Geary Contemporary, she creates her own “Vase of the Century” paintings, switching out the originals’ patriotic motifs, like buffaloes and George Washington’s portrait, for images of asylum seekers and the toothbrushes, tuna cans, and burner phones that migrants leave behind.

A study published in February 2019 estimated that just 2.8 percent of artists in 18 U.S. museum’s collections were Hispanic/Latinx. If the message that American institutions in general exclude the historical contributions of Latinos wasn’t clear, the text details embedded among Mayorga’s pieces (“FUCK ICE,” “ILLEGAL,” or “THIS SUCKS”) should get the point across. Again, she is certainly not the only Latinx contemporary artist spelling out the omission: Guadalupe Rosales has made her whole practice an archival one, collecting and documenting her own community’s history because no one else was going to, while Patrick Martinez has made neon signs with pointed political messages that say, “Invest in the Oppressed,” “America is for Dreamers,” and “Deport ICE.”

Mayorga is smart to reclaim the language of art history to enter into a conversation where Latinx are almost always excluded. Yet though you can give credit to rococo and the decadence of the Catholic Church’s architecture and art for inspiring Mayorga’s lavishness, the fête galante aesthetic also comes from Mexican-American cultural ceremonies like quinceañeras, a girl’s coming-of-age party. In this show, her sculptures Sweet Water and Alligator Boots both reference 16th-century sugar sculptures made for banquet table centerpieces, at a time when sugar itself was so expensive it created its own luxury art form. Her versions look like the centerpieces that would dot tables at a quinceañera. These feature images like a nude woman donning pointy alligator boots—the iconic footwear of many Latino uncles—or a flag that reads “No Wall,” and are reminiscent of the iridescent swans or angel tchotchke you find in dollar stores, artifacts many Latinos proudly display in their home.

“It’s this soft idea of luxury which all goes hand in hand with the way I view the American dream and question the desire for it,” Mayorga tells me. In other words, part of the experience of a Mayorga work is the sensorial overload, the burden of artificial sweetness. But, if you aren’t left with an unpleasant aftertaste, were you even paying attention?

Yvette Mayorga, “A Part of Us,” is on view at Geary Contemporary through December 20, 2019.