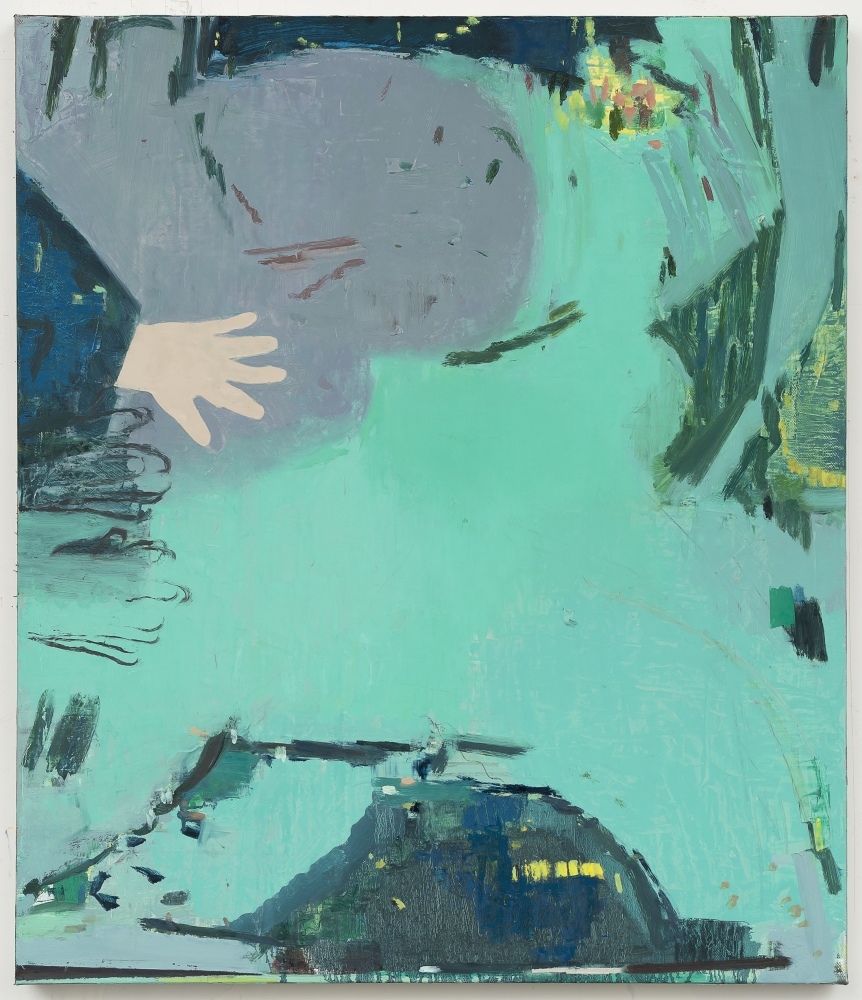 Certain artists settle easily and without trepidation into a credible style that allows them to proceed in an unencumbered, linear fashion; Sangram Majumdar is apparently not among them. A decade ago, it made sense for the critic Jennifer Samet to discuss the Kolkata-born New Yorker’s work under the rubric “painterly representation”; at that time his art was rather academic in character, with an affinity for restrained color enlivened by a sensitive touch. Fellow painter Kyle Staver noted—and not without admiration—“a stubborn and humorless aspect” to this approach. By 2013, Majumdar had mostly switched to abstraction, using planar yet complex space and a more energetic, even sometimes downright seductive palette, while still also exhibiting some realist paintings. However, one could still notice that at least a few of the ostensibly abstract pieces were based on observational experience: Take tilt, 2013, which derives from the form of a postcard rack. As far as stylistic resources go, Majumdar calls on the full panoply of classic modernism—though he insists that he can absorb anything, from Indian miniatures to video games.

Majumdar’s show at Geary Contemporary, “Once, and Twice,” reintroduced the figure into the essentially abstract context he’s made for himself, but in a different way: Rather than being based on observation or realism, the imagery in these eight new paintings were essentially ideogrammatic. For instance, in call and response (all works 2019) a series of diversely colored shapes are loosely arrayed on a white ground according to an implicit grid; a few of these are rough depictions of hands. One of them, toward the lower left, has bright-red fingernails. It’s hard not to think of the handprints that turn up in some of Jackson Pollock’s poured paintings, or in Jasper Johns’s Periscope (Hart Crane), 1963, or Diver, 1962–63. The hand’s presence implies a questioning of the autographic aspect of painting, and in the case of call and response, and of other pieces that feature similar glyphs, we wonder what came first—the seemingly representational depiction of a hand, or a moment of pure abstraction? Which was the call, and which the response? Similar concatenations of marks—this time white against a primarily blue ground, as though they’d come about through erasure—also occur in the hidden. But maybe they are something else altogether, like clusters of brushes sticking upright from cans, à la Johns’s 1960 sculpture Painted Bronze, evoking a possibly fortuitous connection, but also a teasing self-consciousness about the act of painting. A single unambiguous icon of a hand appears in expulsion, entering the painting from the left, fingers spread wide, as if to caress the large patch of green that occupies most of the canvas.

Other works depict a full figure, either striding (in a loud sun blinds and a cautionary tale [after Rama destroys the Ogress Tadaka]) or perhaps running (once, and twice [for I.]). Any narrative impulse is held in abeyance, however. The bodies seem shadowy or provisional—not intangible but apparently becoming so. And despite appearances, their movement is not really forward but is a kind of steady vibration within the pictorial field. The palpability that was suggested by the recurrent hand is withdrawn. In compensation, space keeps opening up. The painted surface is what’s on the move.