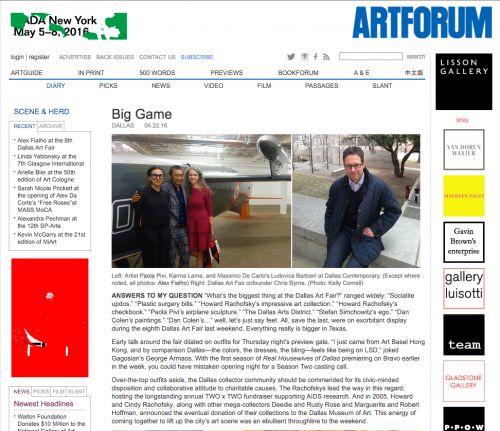 Early talk around the fair dilated on outfits for Thursday night’s preview gala. “I just came from Art Basel Hong Kong, and by comparison Dallas—the colors, the dresses, the bling—feels like being on LSD,” joked Gagosian’s George Armaos. With the first season of Real Housewives of Dallas premiering on Bravo earlier in the week, you could have mistaken opening night for a Season Two casting call.

Over-the-top outfits aside, the Dallas collector community should be commended for its civic-minded disposition and collaborative attitude to charitable causes. The Rachofskys lead the way in this regard, hosting the longstanding annual TWO x TWO fundraiser supporting AIDS research. And in 2005, Howard and Cindy Rachofsky, along with other mega-collectors Deedie and Rusty Rose and Marguerite and Robert Hoffman, announced the eventual donation of their collections to the Dallas Museum of Art. This energy of coming together to lift up the city’s art scene was an ebullient throughline to the weekend.

An influential new initiative, the Dallas Art Fair Foundation Acquisition Program, extended the synergy between collectors and the Dallas Art Museum. The program provides the DMA with $50,000 in acquisition funds, from which they made a smart selection of works from four artists / galleries: Lina Puerta’s collagraphs from Geary Contemporary in New York City, Merlin James’s gorgeous frame painting from Kerlin Gallery in Dublin, Michelle Grabner’s bronze sculpture from Green Gallery in Milwaukee, and Nadia Kaabi-Linke’s gridded funerary relic from Lawrie Shabibi in Dubai.

Lawrie Shabibi cofounder William Lawrie said the DMA initiative brought incredible amounts of attention to their booth (weavings by Farhad Ahrarnia were also noteworthy). He extolled Dallas collectors’s real investment as well as sense of humor and lack of pretention. “They are really into taking the piss here in Dallas.”

But the weekend’s most talked-about moment came Saturday afternoon with the Nasher Sculpture Center’s star-studded “Agents, Advisors, Devils, and Apostates: The New Art World,” a panel featuring dealer Paul Schimmel, Amy Cappellazzo, and collector Stefan Simchowitz, moderated by writer Sarah Thornton. One got the sense that Cappellazzo and Schimmel would have happily towed the party line had it not been for lightning rod Simchowitz challenging them (or, more accurately, cutting them off) at every turn. On-stage eye-rolling abounded, including during Schimmel and Thornton’s important defense of traditional channels for scholarship and legitimation via public institutions, against Simchowitz’s posturing for an amoral art world “flattening” cultural distribution between collectors and museums. Despite Simchowitz’s imploring the panel to talk about something other than Warhol and Jeff Koons, the conversation continually returned to none other than… Jeff Koons. “Koons turns those fabricators into his bitches,” at one point Schimmel said, unfortunately, to which Cappellazzo coolly quipped: “God bless the bitches.”

Unsurprisingly, Cappellazzo’s intelligence and economic acumen impressed throughout, and at one point she described the free-for-all as a “semiotic unfolding of the theatrics of a panel.” Yet she lost points with some when she claimed, “I feel sorry for lots of artists. Just because you weren’t good at math doesn’t mean you don’t need to understand the laws of supply and demand and business tenets to help the way you strategize your making of things.” Talk after the event was divided: Multiple artists said they left early, one calling it “soul-sucking.” Art advisor John Connelly called it “seminal.” More than anything, I found myself questioning the central perspective: If “The New Art World” is one of “Agents, Advisors, Devils and Apostates,” where exactly are the artists?

I was rushed off to Southern Methodist University by Noah Simblist, whip-smart chair of the university’s art department, to answer just that question. The SMU MFA thesis show, with tongue-in-cheek, absurdist performance-based work and a collaborative exhibition model, could not have felt more removed from the fair. I just missed Andy Davis’s performance, but was partly relieved for the scheduling conflict; perhaps without hearing Cappellazzo’s strategizing “advice,” the bank accounts of these young artists won’t rival those of their more commercially minded counterparts. But I left encouraged by their distance from the up-front commodification just down the road.

Artist-run spaces are vital in Dallas—the fair probably could have done a better job incorporating these local voices, platforms, and programming. Most impressive was CentralTrak, an artist residency and exhibition space now in its tenth year, partly affiliated with the University of Texas Dallas. Run by the charismatic Heyd Fontenot, CentralTrak’s “visual arts roast” exhibition of longtime Dallas artist duo and couple Brian Scott and Brian Jones displayed camaraderie and community perspective. Fontenot hilariously equated the Dallas art scene’s communal vibe with Amish barn-building: “I can’t build a barn on my own, so this week let’s build my space, and next week I’ll help build and support yours.”

Other notable on-the-ground spaces included the artist-run Beefhaus, the Power Station exhibition platform, the Reading Room project space, and the Wilcox Space, dedicated to the legacy of late Dallas-based artist John Wilcox. And this was just in the Fair Park/Deep Ellum neighborhood; other Dallas artist haunts include the Bishop Arts District and the Cedars. An Uber Hummer (only in Texas) delivered us back to the area for the “That That” party on Saturday, bringing the locals together until the wee hours of the morning.

At the other end of the spectrum, the ritzy spectacle of the Joule Hotel’s Eye Ball rubbed many the wrong way. Can we all agree that gala planners should stop the rampant “people-as-sculptures” performance “concept”? Thanks in advance. A more creative party came in the form of artist Oliver Clegg’s rotating table sculpture for dealer Erin Cluley’s dinner, changing positions every twenty minutes and providing a welcome reprieve from unideal seating assignments.

By the end, every dealer I spoke with seemed happy with sales, and most were keen to return. A standout moment was self-taught Joe Minter’s assemblage sculpture from his expansive yard show “African Village in America” in Birmingham, Alabama, exhibited by Shrine’s Scott Ogden. Positioned at the fair’s entrance, Minter’s recast metal sculptures from basketball hoops, shovels, iron links, and more foregrounded the insidious history of slavery, described by Minter as the “trail of chains and shackles of American history.” The Met corroborates Minter’s significance, having recently acquired multiple Minter sculptures from the visionaryBill Arnett’s Souls Grown Deep Foundation.

Cernuda Arte’s display of Cuban art including Wilfredo Lam and Robert Fabelo was another highlight, contexualizing their artists with labels and photographic portraits. I learned more in their booth alone than I did at the hip opening at Dallas Contemporary, whose trio of exhibitions of Dan Colen, Paola Pivi, and Helmut Lang filled the former factory with large-scale work. There we got to consider the range of Colen’s painting practice and also take in one of the first installations of Pivi’s Untitled (airplane) since Pivi was awarded the Golden Lion at the 1999 Venice Biennale.

There’s still much to learn when it comes to these freewheeling social and speculative affairs. As Cappellazzo concluded at the Nasher: “The marketplace is the most interesting place right now. There isn’t a single area of cultural production unaffected by this moment of wild transition. The music industry already had it. Publishing, boy have they had it. The art world is next. Stay tuned.”