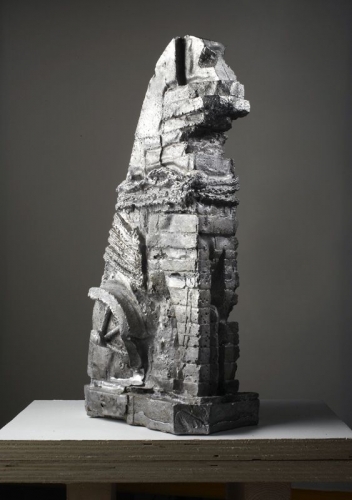 Ahead of his career as an artist and critic, William Corwin dreamt of being an archaeologist. Admitting to an element of Indiana Jones in his fantasies, he was quickly put off by the science of the discipline and trained instead as an architect before segueing into art. Nostalgic for his earlier ambitions, perhaps, Corwin has conducted many interviews with archaeologists, counting Lord Colin Renfrew amongst several illustrious catches. Once the archaeology thing is understood, it is impossible to dismiss ensuing insights into Corwin as an artist as mere biographical fallacy.

Largely self-tutored sculptor, he who favors elemental, almost obstinately primitive modes of casting, carving and assembling in materials like lead, pewter and concrete. Almost everything he makes has something of the appearance of artifacts awaiting proper designation, of objects unearthed and dusted down as best they can for now, as much for the benefit of science as for aesthetics. Less creation than specimen, a Corwin is an “anxious object” in Harold Rosenberg’s sense of that phrase, teasing us with its own status and discharging clues as to what it might mean in the very unease it generates. In the vein of “artist’s artist” he is, you could say, an archaeologist’s sculptor.

Corwin’s seraphim – the six-winged angels of Ezekiel’s visions – parenthetically acknowledge in their title filmmaker Jack Smith’s queer classic premiered at the nearby Bleecker Street Cinema in 1963. This is doubly appropriate as Judson is a deeply gay friendly congregation and has a longstanding historic connection to avant garde culture. Judson had provided exhibition space for the likes of Rauschenberg, Oldenburg and Dine early in these artists’ careers, as well as rehearsal and performance space to Trisha Brown, Yvonne Rainer and other doyennes of dance, as something integral not incidental to their ministry. Greeting Corwin’s nod towards Smith with enthusiasm, the minister who oversaw the commission, the Rev Micah Bucey has written in his own bio statement at the church’s website: “I think Christianity is inherently queer and I paint my nails to show my commitment to a continual re-queering of the Gospel.” Flaming Creatures evidently landed in the right parish.The assembled characters on an improvised altar-like support at the Judson Memorial Church that has been on view in their sanctuary this Lent – part of the church’s series of commissioned residencies – conforms in spirit, despite being an art project, to Lenten prohibitions on iconography. Its obstinately plain sculptural forms partially shield the congregation’s view of the familiar carved angels on the wall behind. Traditionally attributed to Augustus Saint-Gaudens but likely by an assistant, these almost Hallmark Card-like, markedly feminine angels would in any case have been hard pressed to commune with Pazuzu flanking Seraphim (Flaming Creature), 2019, the three angel forms at the heart of Corwin’s group based on ancient Mesopotamian representations of Pazuzu, king of the demons of the wind.

Unfinish and anti-monumentalism are key attributes of Corwin’s art in general, and Flaming Creatures in particular: his altar arrangement would have fit right in to the inaugural exhibitions of Met Breuer and the new New Museum respectively. At his most recent solo gallery exhibition, at Geary last year, “The Old Gods,” a strange mix of purposiveness and casualness permeated the mode of display. Resembling forlorn fragments at an excavation site museum, scrupulous rigor as to where a thing was retrieved won out over visual concern of how it might look best: a case of science trumping aesthetics once again. And yet, bereft of original context or function as they might seem, his strange hybrid forms often emit a charge greater than the sum of their material actuality. They are not so much provisional as contingent. It could be said that he collides the prehistoric trope of modernist sculpture (think of the menhirs of Hepworth or the precycladic kouri of Brancusi) with a postmodern penchant for nonchalance, for surface indifference.

Disparate though Corwin’s characters, references and arrangement remain, they exude a sense of belonging to a given order. A sharper sense of juxtaposition occurs with the setting, and even there, somehow, there is the possibility of ecumenical coexistence, even between the hallmark angels and Corwin’s seraphim, cast in rigid foam, from 2019. The artist views his non-angelic personages, cast in lead from 2014-15, as the four evangelists whose corollaries — similarly contrasting in style to the Pseudo Saint-Gaudens and Corwin’s angels – are present in the rose window above the ensemble, in the only window in the sanctuary not by John La Farge (again, their authorship is not certain, though the favored contender is one D. Maitland Armstrong). The iconography follows the traditional attributes of the evangelists but with the twist of pre-Christian precedents, although that too has Christian precedence: Corwin’s lion for Saint Mark, for instance, is based on the Piraeus lion in Venice which that city had appropriated for their patron saint. The lead piece second from the left, resembling a blade to blade stack of axes, is, according to the artist, based on the Yipwon type of sculpture found among the Sepik River peoples of New Guinea.Another trenchantly archaeological aspect to Corwin, besides process, presentation and state, is his layeredness. Objects and relations between objects come with varying and intersecting symbolic possibilities. The pervading sense, in “The Old Gods”, was of idols and artefacts from one order or culture incorporated by the next, their meanings reinterpreted; or else unearthed out of sequence, so that one era’s faith system jutted into the sacred space of another like stray guests from a different party. This conceit is revved up at Judson where the line-up of characters on the altar-pedestal resist coherent gestalt. This despite the fact that the arrangement is essentially symmetrical and hierarchical. A red seraph presides dead center to form a trinity with its cement-colored confrères, all three thrust aloft by rudimentary, scrappy yellow poles. A stacked, rope-bound stone piece (Teeth, 2018, in hydrocal and sand, from the Geary show) anchors the arrangement at the foot of the central seraph while a pair of sculptures bookend the pediment-forming ensemble, mounted on red pedestals. The other two sculptures break the symmetry, one by clinging to the side of the stone stack, the other by finding a center left position not echoed on the right. There is enough symmetry and regularity to induce a sense of missing figures, which would extend the archaeological conceit. If the vibe instead is of completeness, one doesn’t think of these strays as casually milling about so much as fulfilling some secret or obscured function within a ritual.

The red of the presiding seraph and the end piece pedestals, and the yellow of the poles, pick up in the vaguely psychedelic marbling effect of the altar’s façade which adds another art historical clue to the lasagna of references, this time being a repeated fragment printed off the internet from Fra Angelico’s decorations of the San Marco convent in Florence.

With Easter fast approaching, and a congregation hungry perhaps for an unimpeded view of resurrected Victorian angels, Corwin’s modern/prehistoric interlopers must finally prepare to be packed away. A celebration of his residency is planned for Tuesday evening, April 16, 5-7.30PM