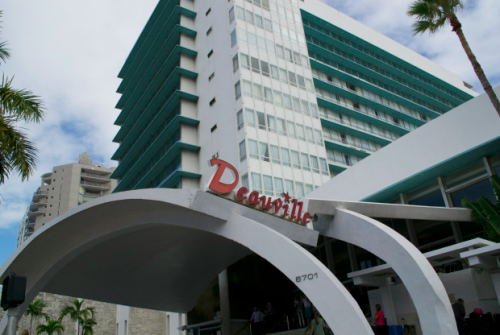 A cab driver told me there are fewer people in Miami beach this year due to Zika fears. An artist told me there were fewer artists in Miami due to Donald Trump’s election. Everyone tells me they have fair fatigue. But dealers, willing to refute any and all evidence to the contrary, say their fairs have been busy.

Whether or not anyone is suffering as a result, one thing is certain: attendance is way off from last year.  There are fewer people in the streets and at the fairs across the board. Certainly this was the case at NADA yesterday, which was uncharacteristically quiet. Not that this seemed to bother the dealers. Most were relaxed and seemed content, having made their sales the day before. This stood in stark contrast to Pulse, where even the slightest expression of interest, inspired long sales pitches and desperate looks. I felt bad for them.

A slower pace and fewer jovial parties from most of the fairs came as a welcome relief, even if they were a result of election malaise. There are a few more grey hairs amongst all of us—including this reporter—and the giant, all day, courtyard parties at NADA have been replaced by a swag table and cafe that now serves fancy donuts. (Although, P Diddy made an appearance today at the pool, so the parties haven’t actually gone away—they just aren’t the permanent fixture they’ve been in the past.)

The spirit, though, remains the same. More than any other fair, NADA’s dealers are defined by an investment in art that’s so intense it seems to demand generosity. For example, when visiting the Invisible Exports booth, Benjamin Tischer made a point introducing me to Jerry the Marble Faun at Situations.“That’s a rabbit hole you have to go down!” he beamed as he told me about the ceramics made by the gardener for Mrs. Edith Ewing Bouvier Beale and her daughter Edith Bouvier Beale. The two were relatives of Jacqueline Kennedy and famous for shunning the world after high society wouldn’t accept their eccentricities.

Tischer enthusiasm wasn’t an isolated incident. MacGregor Harp at 247365 recommended I see Raul de Nieves at The Company, because his beaded figurative sculptures look infused with joy and dance. And Phil Grauer, a NADA board member and partner at CANADA, offered some context. The fair wants to be more inclusive. Last year’s venue experiment with Fountainbleau didn’t work out that well for that reason. The hotel wouldn’t make more space available to the fair at a reasonable cost, so they were forced to reduce the size. It created an atmosphere they didn’t like, so they returned to The Deauville this year with the objective of offering more space to more dealers.

The efforts paid off. The fair looks and feels better. Perhaps most importantly, though,  the quality art to crap ratio is better than anywhere else, making NADA the model, and fair to beat.