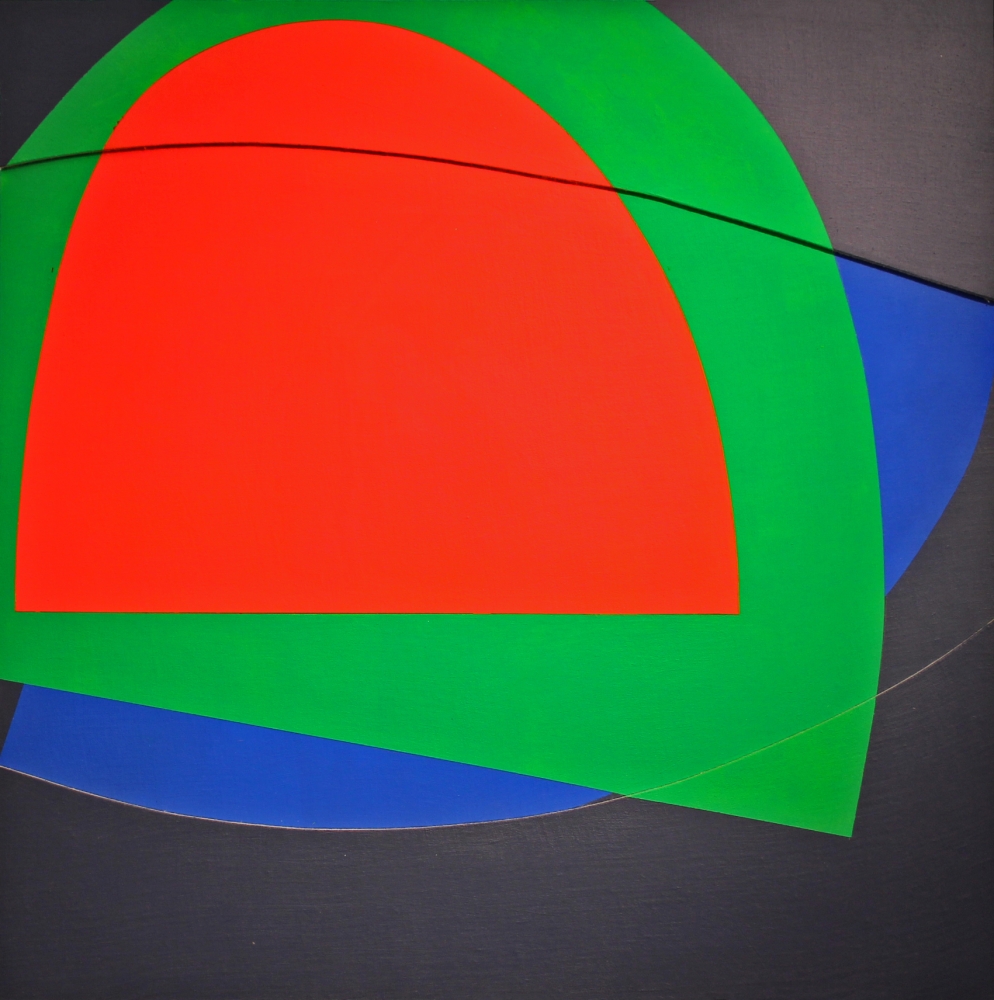 Shades of red, green, and blue familiar from children’s toys of yesteryear are stoked into a playful day-glow stack of hard-edged gumdrop shapes in the painting, Untitled (Eclipse) (2017), on view in Jason Stewart’s solo exhibition in Geary Contemporary’s project space. The paint itself is blocked slightly awkwardly in relationship to the architecture of the raised surfaces of shaped canvas structures that fit within a square format. There is no lack of sophistication here – the artist works with full intention and awareness of how every gesture matters. While puzzle-like, the flawless carpentry only serves to further the artist’s destabilizing tactics. It’s as though Stewart is creating rules with form in order to color outside of the topographic lines he so painstakingly crafts. The spatial dance enacted leaves the viewer with odd visual paradoxes to unravel.

In Untitled (Saratoga Hot) (2017) for instance, the oddly eye-like center of the painting appears to advance toward the viewer even though the powerful architecture of flat cadmium red that frames it would normally occupy the foreground in any other context. Instead, careful lighting and the raised topography of the central pale pink iris-like center are part of what keep it in check. The sharp geometry of the hunter green sclera offsetting the pink, however, thwarts a bodily reading with the kind of sharp geometry more often associated with the balsawood perfection of model airplane kits.

Although, at first glance, the hard-edged elements in Stewart bring 1960s Ellsworth Kelly to mind, Stewart’s destabilized sensibility and almost inappropriately punchy color choices feel contemporary. His knack for continual self-invention and risk taking is rare in a mature artist. In fact, being able to maneuver abstraction in a manner that is sophisticated and surprising is a feat for an artist of any age. Should you make the trip to Geary Contemporary in West Soho, be sure to also ask to see all Stewart’s paintings as some of the best, in my view, are tucked away in the office and backroom.One of the most startling paintings in the exhibition is Untitled (Crosstown) (2017). An earlier version of it glimpsed in the artist’s studio was perhaps overly tasteful in the perfect white-on-white “U”-shaped architecture that could have easily been the handiwork of an Italian design studio had Stewart not added a surprise ending: a large split black and fluorescent yellow quadrilateral band extending across most of the top of the painting. Heedless of the architecture and conventional good taste, Stewart employs the kind of yellow that usually only Charlene von Heyl can wield successfully. Under Stewart’s brush, it functions like an irreverent decal or a Joseph Albers color theory transparency exercise gone haywire.