acrylic and gouache on canvas

Hand-sewn objects and crochet on canvas

Gouache and cut paper on paper

Gouache and cut paper on paper

Geary presents Softer but Louder, a group exhibition curated by Dain DeltaDawn, featuring the work of Amie Cunat, Katy Fischer, Yvette Mayorga, Kelly McCafferty, and Sheida Soleimani. Softer but Louder is a culmination of works that harness a modest way of making: the artists expertly manipulate material, texture, and shape to maneuver the humble to be powerful and at times, aggressive. As if by magic, smaller components in each work fit together calmly but confidently to make revelatory and critical assertions. The exhibition brings together a collection of five artists’ respective concentrations on tactility, material, and object.

Kelly McCafferty slowly collects memorabilia and mementos from around the world, and just as methodically, hand-stitches them to stretched canvas in carefully arranged compositions. McCafferty’s narratives surrounding each of her works is as mysterious and specific as where the objects are sourced: in Leo Rising, McCafferty begins with a personal obsession with Lucille Ball. The artist traveled to Jamestown, New York to visit Ball’s hometown and to attend the annual festival honoring the comedian; some of the objects in the work serve as a representation of this point of origin and lead to other journeys and objects within the piece. McCafferty’s works serve as homages and portraits, a diagram, and a road map all at once, through the accumulation, assembling, and exhibition of personal collections.

Similarly, Katy Fischer’s collections of constructed objects in both paper and ceramic patiently build to a crescendo of gradations, texture, and line. The narrative that each collection describes is a plotline of production. Eyes follow from one to the next, searching for connecting threads. The shards resting in their vitrine are hand formed one-by-one, each glazed and fired as constituent components that compose the whole.

Yvette Mayorga’s portraits and sculpture function as a frank commentary on the American Dream through mimicking sugary frosted cakes. Mayorga harnesses and perfects a dystopian Candyland aesthetic that hollers and wallops at its surface, but beneath articulates an earnest and deeply personal understanding of the effects of colonialism through material and object. Her mark-making through piping and abstracted detailing filters reality through a disjointed and disturbing lens at the same time the frosting-like acrylic paint seduces with its fragility and saccharine color palette.

Sheida Soleimani’s photographs use media trends and the dissemination of societal occurrences in the news, adapting images from popular press and social media leaks to exist within alternate scenarios. In B-Team (Iran Deal) , Soleimani employs imagery of politicians involved in the creating of the Iran Deal, an agreement between Iran and six other nations designed to limit Iran’s nuclear capabilities, juxtaposed with bodies of wrestlers (Iran’s national sport). Soleimani’s use of sculpture and costume within photograph creates a form of live-action collage that produces a slow-burn of jarring and sophisticated imagery and demands a careful unfurling.

Amie Cunat has created a series of furniture and domestic objects that have come together in her site-specific installation, Ochre Room, in Gallery 2. Influenced by Shaker craft and culture, the work is a reflection on how American historical hopes and contemporary realities can be suggested through this community. Her cardboard and paper sculptures are painted in salmon pink, ochre and brown hues, which form a chromatic interplay with the vibrantly painted walls. Their organization invokes the quietness of a humble storage space. Much like the objects they are inspired by, the meticulous craft of Cunat’s work --rooted in modesty and godliness-- is deafening. 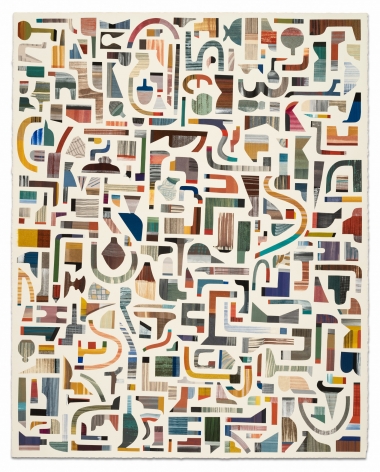 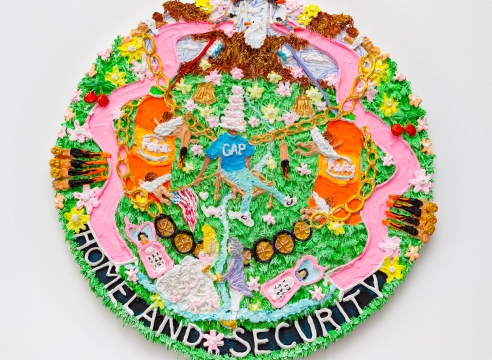